Well guys, today I saw my first robot fighting tournament. Who doesn't love robots fighting? It's nerdy, competitive, but not absurdly manly to the point of being grotesque like monster trucks. There are no ads,  just a bunch of ramp-shaped robots with funny names. I can't imagine anyone who wouldn't like it (other than people who are afraid of robots... though I've never met such a person). 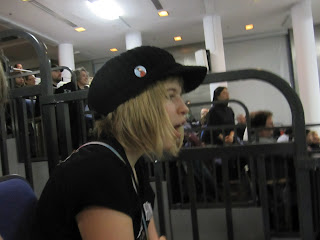 Me avidly watching the match & stuff


ANYWAYS, it was pretty cool. The setup is a 6 foot wooden octagon with padded floor around the outside. The robots are put facing off in the square, and try to knock each other out of the ring. There are three rounds (if there is a draw after 3 minutes, they just do another round). For the heavy-weight competitions, there is a pole in the middle to prevent them colliding straight into each other at the beginning of the fight.

If they weren't fighting, the robots created art or danced. The art was always at least a little abstract of course, but very cool.

The names of the robots were hilarious. Some were cute, others sounded like they could be names of Death Metal bands. 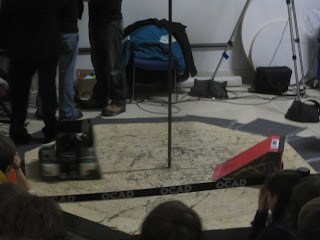 SARS vs. Pretty in Pink in the ring.
SARS: Green box robot. 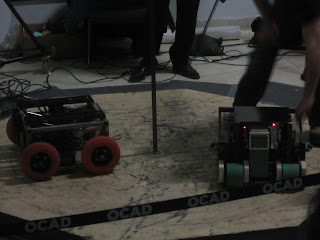 Scary Mary: had blades at the front, but dropped out of the competition due to damage that could not be fixed in the timeframe.

OverEasy: Made of a toaster. People, you can not understand how gleeful my friend Geneva & I were when we heard there was a toaster robot. Still had the slots at the top too. Loved that little guy. 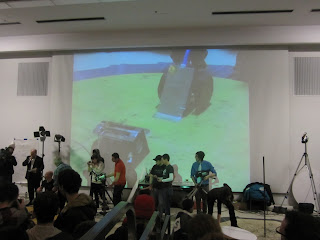 Overeasy is the robot at the bottom left of the screen
Eagleslayer: Student made. 2 wheels and a ramp in between them.

Eagle 2: The same as Eagleslayer, but had a 3 pound difference in weight.

Octane: Another Eagle-like bot. Only difference: it had the words "sorry you lost" scribbled in marker on the edge of its ramp.

The Beast: Red box with red & blue lights on top. Like a moving small red TV. 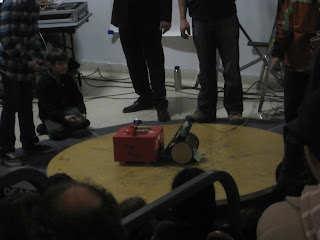 The Beast vs. Octane


Seizure Inducer: Light flashing robot which was self controlled. It kind of failed and we were all left in the dark to watch almost none of the lights flash, but cool in the light. It was a bit smaller than a microwave and faced off against...

Sir Bumpsalot: Everyone loved this robot. Tiny little thing, about the size of a guy's fist. Self controlled, it just went to the edges of the ring and went back to the centre, sensing where it was. And this was controlled by a 6 YEAR OLD. Very cool. As I said, it faced off against Seizure Inducer (which was more than double its size) and WON. Fantastic. 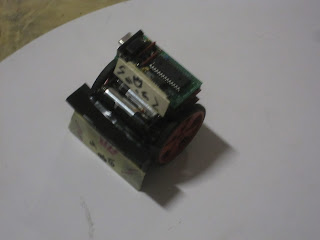 Vampire Leprechaun: Same design as the Eagle 2 & Eagleslayer but with a rainbow bit of paint.

Muffin the Cat: This thing looked slightly possessed. As if someone had stitched together a dead cat over robot insides. It made an abstract art work with blue paint.

AutoMatisse: Loved this thing. Looked like a paint palette & drew a face on paper. 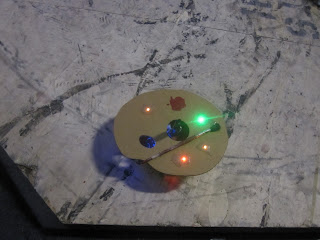 Bristol Bots: LOVED these. Little toothbrush heads with batteries on top that caused them to vibrate & move around.  They created art with sand. 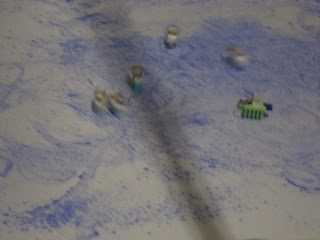 So that was Sumo Robot Challenge at OCAD. It was only $5 per adult, $2 a student, and kids under 10 are free. So yeah, if you live in Toronto or will be in Toronto in the Spring of 2012, you should go see this. Fun day & I discovered a kind of fighting (other than ninja-esque fighting) I actually like in real life. 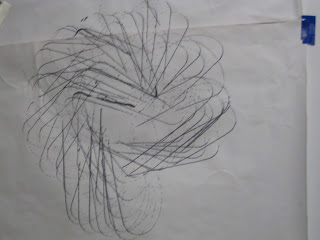 An example of one of the artworks done by a robot 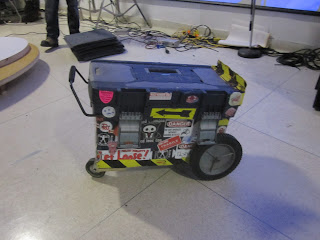 The cart they used to carry the robots to the ring (or rather the octagon)
Ok, now I actually have to go to bed. It's 1:37 in the morning people.
Julianna xoxo
Posted by Julianna at 22:31