I'm in a band now! Finally! It's pretty awesome, I must say. Fantastically teenaged, but they're talented. 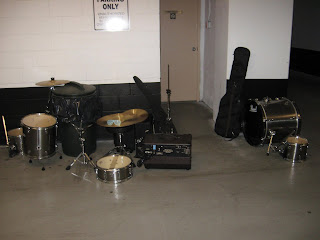 The Band's Instruments (also our facebook fan page profile picture)
See, I've just joined a band with 4 other people. And they're all guys. I'm the only girl, but that's more than fine with me.

We're called Ragione, which means "reason" in Italian (fantastically angsty teenager-like band name), and we play every kind of music. But particularly pop/rock/hard rock/metal.  Anything within that range is the usual, but last gig they also sang a YouTube song called "Pink Fluffly Unicorns Jumping on Rainbows". So it's all really for the fun of it, we're not that serious. (Note: I wasn't at the gig cos I only officially joined today).

The band is made up of all nerds. This also makes me happy. We have...

The Drummer- My friend Chancellor. Metal head, but an absolute teddy bear. Huggable. We met at school, he recommended me for the band.
The Guitarist- Isaac. Only properly met him today, but I see him walking through the halls at school sometimes. We practice at his house, and his Dad is Steve Page of the Bare Naked Ladies (a Canadian band, not a strip club thing for those of you who don't know). This means we have access to a free recording studio at his cottage if need be (which I find insanely cool).
The Bassist- Jean-Marc. Unknown. Mysteriously missing due to setting up some sort of trailer or something. Not sure what he's like at all, but apparently he goes to another school.
The Singer- Watson. He has a full name, but he just likes to be called Watson. I went to school with him when he was a skinny first grader who was obsessed with raccoons, and now he's a big tall 9th grader obsessed with John Lennon. Interesting to see his progression from childhood to now. He and Isaac started the band in January-ish, then Chancellor joined in March, and then Jean-Marc joined in April.
The Keyboardist- Me. I joined today. Judgement Day, of all the days in the year. I also sing sometimes. Only girl, and at least a head shorter than everybody else.

The day began with the drummer being late to pick up my keyboard and carry it to Isaac's house with me. I expected Chancellor to be here by 11:15, but he still wasn't there by 11:27, so I went with the plug, lyrics, and an attachable pedal to the band practice place. There I met Isaac's Mum, and Isaac and I went back to my house to get the keyboard ourselves in utter silence. I was expecting for him to hold one end of the keyboard while I held the other (it's 3 feet long and somewhere between 10-20 pounds), but it turned out it was much easier if he just tucked it
under his arm. We joked how sunny it was for a Judgement Day, discussed the band, put the keyboard in the basement by the drum kit, and practice began within minutes. (In the time waiting, I played Rock and Roll Nerd on their fantastic upright piano in the living room. Gorgeous sound).

I'm rather impressed with the quality of it all. So many bands don't have it coordinated, but even though there were works in process, they were catchy as hell and you wanted to listen. Everything was on. Singing was muffled by the power of the drum set (which I was really startled by), but the whole thing sounded damn good. Isaac made up a damn good guitar riff, and when we jammed with improv, it was pretty amazing. It was a really good place, everybody supported each other's music. They even liked my songs. Really sweet.