I literally just came back from seeing Stephen Fry (among others) introduce the winner of the Glenn Gould Prize at the Royal Conservatory of Music TELUS building on Bloor Street W. I am extremely happy.


The presentation was at 10:30 am (during school), so it wasn't too easy to convince my Mum to let me off of school for an hour or two. I told her I knew he was never going to come back to Toronto again (seriously, I've never heard of him coming here ever), and that he was an incredible writer, TV presenter and the QI Master (which I watched sooooo much while I was in England & I also watch at home via the internet). Also, I knew I'd only be missing one class, at the most two: Geo (which we do nothing in) and Math (which I can catch up on). She wasn't entirely convinced, but said I could go on my own via TTC, and that she'd give me a ride there.


I excitedly ran down the stairs to find my Mum outside...but it turned out my geo class's clock runs 15 fast (I tried pretending it was an April Fools' joke, only to leave again 15 minutes later after watching every Mighty Boosh crimp on my friend's computer). At 9:58, I ran down the stairs again & jumped into the car, smiling. Then with Techno-Latin music, we went off to 273 Bloor Street West.

The Mighty Boosh crimping
First, let me start off by saying the place is gorgeous. As in glass walls, state-of-the-art architecture with the old building on the inside. Incredibly gorgeous. It reminded of the Royal Shakespeare Company, but with shinier floors.
The ceremony itself was relatively short, but incredibly well done. There were a load of politicians' notes that were read, speeches that were made, and a couple of polite jokes. Incredibly upper class, yet it was a free show. The Glenn Gould Prize is apparently the equivalent to the Nobel Prize for the arts, so definitely a huge deal. It was only 45 minutes long, but really interesting to see something so culturally upper class, but not snobby.


The crowd was both fancy and not. Up in front of me were a bunch of politicians (including Bob Rae) that wore clothes appropriate for a wedding, but behind that were the general  (and slightly liberal) public. The people surrounding me were:
1. A man who looked incredibly like Charles Darwin,
2. Two university students discussing politics and the stress put upon politicians & what they thought of different policies
3. Another university student who never spoke, looked amazingly nerdy, and was almost entirely covered in St. Paddy's Day green clothing. Even his running shoes.
4. A lady that looked oddly like Allison Kilkenny with makeup and a pointier nose.


So with that kind of crowd, you know you're in a good place.


The thing started off with 2 genius prodigy children playing the 8th movement of Beethoven's Spring Sonata (I've no idea how I remember that). The violinist was 11, and the pianist was 12. The piece could not have been played more perfectly. They had increible emotion, precision, and talent that sounded like it belonged on a CD. Insane. I play piano, and believe me when I say the runs up and down the piano sound incredibly difficult. Such fast playing, and it wasn't just your average scale in C major. And the violin was as fast as that. Amazing. I swear, they're child geniuses.


And then the jury came out. First announced was Stephen Fry, the man himself. The announcer introduced him as "a writer, director, and actor. My personal favourtie work of his are the Harry Potter Audiobooks. Please welcome, Mr. Stephen Fry".
Let me just say, I think Stephen Fry is the epitome of English culture. He wore a suit with a white shirt with a pink grid pattern & a indigo flowery tie. If that isn't characterful*, I don't know what is. 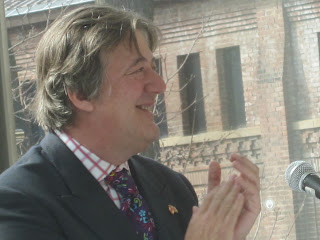 He's so incredibly English.
The rest of the panel (in order of seating) were film director Atom Egoyan,  Singer/songwriter Dadawa, pianist Gary Graffman, singer Elaine Overholt, producer Phoebe Greenberg, and recording industry executive Costa Pilavachi. The announcer was Paul Hoffert.
The winner was a fantastic choice: Mr. Leonard Cohen (who I'm also a fan of, so I flailed about quite a bit trying to see where the heck he was). Sadly, Leonard Cohen was at home because he had only been told that he won within the last 2 days, but still, it was an extremely well deserved award, and I was still very happy.
Every member of the panel did a very meaningful speech, all of them comparing the uncompromising style of Leonard Cohen with the incredibly similar fearless style of Glenn Gould.
Stephen Fry joked that he was very disappointed because he though they were awarding the prize to Justin Bieber (he said the word "Bieber" in his very eloquent Engish accent like no one else can. I grinned my face off).

After the panel was done, I rushed over to the desk where he was signing someone else's books (she had THREE of them... suddenly I felt like a bad fan). Mum urged me to talk to him, or at least pose with him as background. I went to grab my sketchbook for him to sign, but I was too late. 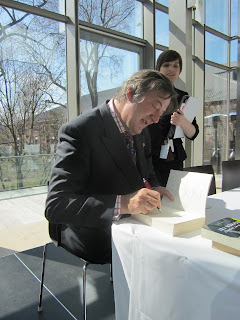 Stephen Fry signing someone else's books
He walked out literally less than a minute after the announcement was over. I ran to follow him but he went through the doors of the dark theatre too soon.
"Will Mr. Fry be coming out again for fans???" I asked the man at the door frantically, but respectfully.
"He's going to be doing press releases. It'll be a while."
"I told you to get him while you could!!" My Mum gritted her teeth a bit.
I was just speechless, then finally said "It's my own fault Mum. It's my own fault."

I then came back after 5 minutes to find a new guard at the door. I asked them to find the disappointing reply of "No. He's not coming out again."

I had absolutely nothing to say.


After another couple of minutes, the doors opened to the public. Inside was a fantastically large, gorgeous theatre. I mean, just look at this place. It looked exactly like this.

I walked around the left aisle a bit, staring up at the ceiling, when Mum noticed a lot of people going in and out of the door on the far left directly beside the stage. She immediately could tell something was going on back there, and said "Follow me".


After going through at least 4 doors and a few white walled rooms with small corridors (one of them containing a very shiny grand piano), Mum heard talking in the first room on the left. She opened the door, and sure enough, there he was. Stephen Fry, standing beside two white clothed tables which supported several bottles of water, a coffee machine, and a tray of mini-muffins. 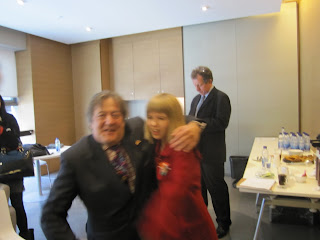 I was so surprised I actually stumbled sideways...
He then squatted for a photo. Cos I'm just that short. And I hugged him. 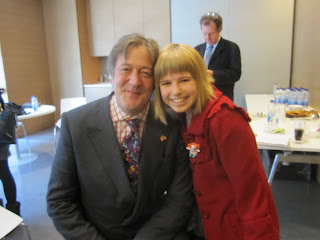 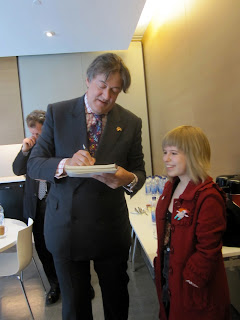 
So that's pretty much how it went. In extreme detail.
Julianna xoxoxo


P.S. After writing this, I went to watch Stephen Fry in America again. Can I just say how incredibly happy it just made me to say: "It's a Stephen Fry day..." and then realize TODAY IS ACTUALLY A FRIDAY?!!! *grins face off at the wittiness of this*


* That was an Adam Hills reference, for those of you who weren't sure... I only just found out that it's actually a word.
Posted by Julianna at 09:45