Alright, I already loved Stephen Fry. I watched several episodes of QI & Stephen Fry In America before seeing him which I adore and laughed about, and I have beautiful memories of listening to him reading the audiobooks of Harry Potter at the age of 8, vividly picturing the Hungarian Horntail chase after Harry on his Firebolt.

So Stephen Fry was pretty high in my listings.

But then, after seeing Stephen Fry and meeting him and finding out how incredibly kind he is in person, I felt I needed to watch more.

This always happens. Near the time of seeing comedian live, I get obsessed with them. It's understandable.

When I saw Eddie Izzard, I drew a portrait of him from Dress To Kill and watched a clip from every show of his other than Stripped, cos I wanted the material to be completely new live. 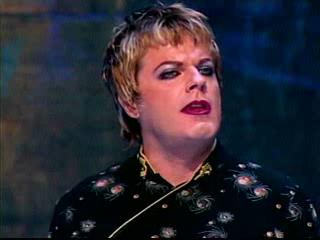 When I saw Tim Minchin, I drew a portrait of him. My dedication was further proven by me convincing my Mum to take me out of summer camp for a day to see Tim Minchin (camp was four hours away). I subsequently never stopped talking about him. Second time I saw Tim Minchin was cos I saved up all my money to go to Stratford-upon-Avon from Toronto (I really wanted to see Matilda and meet my online friends, so I made it happen). I sang Drowned while walking to the bar nearby the gig, bought myself a Tim Minchin t-shirt & CD.

Jamie Kilstein: After seeing him, I bought his CD, have become a lot more aware both food-wise and in politics, have listened to 50 Citizen Radio podcasts (I previously only had a vague awareness of the show), and been vegan on Citizen Radio-related days (for example, Citizen Radio Host Allison Kilkenny's birthday).

Stephen Fry: I have watched 2 seasons of QI in a week.

That's a fourteenth of my week. That may not sound like much, but it is. I justify it by saying I learn interesting facts like "the universe is actually beige" and "Alsatians were not permitted in the Spanish Army because they had an IQ of 60 and the Spanish Army required an IQ of 70 to be a soldier". They are true facts, and rather fantastic ones at that. Time much better spent than when I used to watch Cake Boss for hours on end. But seriously: I think I'm going through a bit of a Stephen Fry stage now. I have to watch "A Bit With Fry & Laurie" next... I must do that.


Just wanted to chronicle it is all... I'll let you know if he becomes the next Tim Minchin for me. I doubt it, but Mr. Fry has very quickly leaped up my listings of favourite comedians (please don't make me list them, I can't put them in order other than 1. is Tim Minchin! Practically everyone else whose shows I have fully watched online get a 2nd place. I love them all. Tim Minchin is only put ahead cos he introduced me to comedy, does great atheist/logic material, & he plays some damn wicked piano).


Julianna xo
Posted by Julianna at 22:27