I have done performances solo, but there's nothing quite like being in a band. Saturday June 25th, 2011 from 6:30-7:27, I learned how much coordination it took to keep up a show of 5 people working together. It was sort of a disaster, but sort of incredibly awesome.


After practicing for hours (and watching a load of Pokemon spoof videos and Weird Al), we walked over to Fairview Avenue to survey our audience. We were slightly freaked out to find 95% of our audience were kids under the age of 9, and that the majority of them were covered in face paint, armed with squirt guns, and riding in or on some form of kiddy transportation (scooters, mini plastic cars, bikes with training wheels, etc.). I tried to beg with my band to omit the heavy rock stuff in fear of making little 3-year-olds cry, but they said to just stick with the plan. Also, our drummer said "we gotta prevent another generation from becoming a load of Bieber fans". That completely convinced me, so I stopped squabbling with them. We packed our stuff into our guitarist's Mum's van to be transported around to the stage, and did a sound check (in which I did the noises at the beginning of Tim Minchin's Ready For This, and a bit of lame beat boxing). To our luck, we had the help of two pro musicians (an ex-Bare Naked Lady and another guy with the last name of "McCouat" who used to be in some famous Toronto band with the word Blue in it).


To be honest, it wasn't so much a stage as a porch with enough room for a drum kit, a keyboard, and enough space for three hunky guys to stand without poking each other in the eye with the heads of their guitars, but it still made me grin my face off. I wore a dark red spaghetti strap shirt with jeans and purple shoes while the rest of my band wore all black. 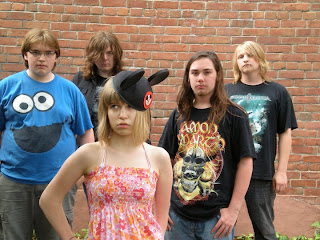 An accurate portrait of us
Our setlist was great, but a hell of a lot of things went wrong. We got polite applause for everything we did, but nothing enthusiastic. Also, to our advantage, the 3 year olds went home & to bed while the parents stayed, and teens appeared out of nowhere for the night's barbecue.


Alice Cooper- School's Out
I introduced this with "This is a good song to celebrate summer". We played awesomely, but paused at the second "no more pencils, no more books,"and the audience clapped, so we cut off the song half way through.


Deep Purple- Smoke On The Water
I introduced this song by saying "This is a song. You may have heard of it. It's called Smoke On The Water.", thinking of that episode of the Simpsons when there's a country musician on stage and says in his thick Texan accent: "This song is 'bout a country. You may have heard of it. It's called America.". I was slightly taken aback when my lead singer murmured to me "I think they probably have...", reminding me that not everyone is fluent in sarcasm, nor is everyone an ardent Simpsons fan. During this song, our guitarist broke a string, and we had no replacement string or guitar with us.


Supertramp- Breakfast In America
Went perfectly. We dedicated the song to Rachel, my drummer's friend, cos it was her birthday.


Gorillaz- On Melancholy Hill
I forgot how riff went, so I improvised, but it wasn't as pretty.

Electric Light Orchestra-  Don't Bring Me Down
I introduced this song saying "This song is called Don't Bring Me Down by Electric Light Orchestra". After 5 seconds of accidentally switching the microphone off, our singer replied "But we don't actually have an orchestra... in case you were confused... by the title". He turned the microphone off and on again. "But hey," I joked. "If there's a tuba player among you in the audience, come on up." The crowd laughed. "Really, come on up." I continued. "Tuba rocks". Thank god for watching comedy. It somehow rubbed off on me a bit and made me funny enough to save us from the awkward lull about whether or not we had an orchestra, and microphone issues.

When we played the actual song, I kept forgetting when the Groos bit began, and made 3 false entrances. Felt like an idiot, but it went really well overall.

Tim Minchin- Drowned
Our guitarist forgot all the chords, and we sped up out of stress. I felt like I made a mess of a beautiful song, but not to the point that I cringed after the gig.


Rob Zombie- What
I think it was here that our drummer's high hat malfunctioned. Funnily enough, the terrified kids I was expecting to see were replaced by loads of kids jumping up and down with massive grins on their faces.


Ragione- Live To Destroy
Great. They wrote this song before I joined the band, and the lyrics are unbelievably fast.


Ragione- Funny
A song I made up, and that we learned 3 hours before the gig. It went down well, although I stumbled at one point and just said "blubliblablubliblablubliblablublibla" for one of the verses. The solos were great, and after it was done, we said our names and our band's name, and awkwardly announced the gig was done after 5 minutes of me playing Peace Anthem For Palestine and the band murmuring things amongst ourselves.


At 7:27, I hugged my friend Kate (who said we rocked, contrary to what I saw), and ran as fast as I could to babysit at a house situated 7 blocks away from the party. I spent the rest of the night watching Scott Pilgrim with a 4 year old and an 8 year old, laughing with them about how many malfunctions happened in that short hour-long set, and cleaning their tabletops and window sills as they slept on the creaky floor above me.
Posted by Julianna at 22:14