I went to Montreal for the annual Just For Laughs Festival for 5 days and 4 nights. After saving up for 2 months by babysitting, recycling beer and wine bottles, playing a band gig, and selling childhood books, toys and video games,  I had enough to pay for my Mum and me to go to Montreal and back on a bus, stay in a downtown hotel, and see 4 brilliant comedy shows. She just payed for our food, shopping, and some taxis and metro fares. So this was a pretty big achievement for me, especially the making of $500 in such a limited time span without a steady job.

We woke up at 5 am. After being driven to the bus station for 6:30, the fantastically cheap double-decker Megabus departed at 6:40 am due to a flat tire. For 5 and a half hours, I listened to Citizen Radio and cried about victims of AIDS that Tree of the Stonewall uprising was talking about (Citizen Radio people, if there any of you here, let me know), ate a peach, and slept for the rest of the time.

Upon arrival, we checked into our perfectly situated hotel Abri de Voyageur (after I flipped the suitcase on the curb countless times and needed a break).
The place was cheap and lovely. Art covered the walls, almost all of it done by an artist who paints people with large and childish faces in black and white, usually dressed in old clothes. The doors and railings were covered in dark red paint. The electrical outlets were oddly upside down, but the lady at the desk with the large gum line and the wire dragonfly ring was eager to help us and the price was right, so it was more than fine for us in Room 202.
Outside, we quickly discovered we were awkwardly surrounded by sex shops (the closest one with candy themed windows). We got our tickets at the Just For Laughs box office in an adorable little pouch, and headed off to Saint Laurent.
When I say we went to St Laurent, I really mean we went to the street, found an incredible shop called Eva B, and didn't go out again until 4 hours later.
It was absolutely filled with junk. To the ceiling. This place was as eccentric as it gets. Bras and scarves and manikins and baby carriages hung on walls and ceilings, there was an old Wurlitzer organ in one corner of the room and a very out of tune upright piano on in the other, the floors creaked with age, and everything smelled vaguely of hash and of the free lemonade and vegetarian samosas the owner gave out. A completely awesome Bohemian atmosphere. 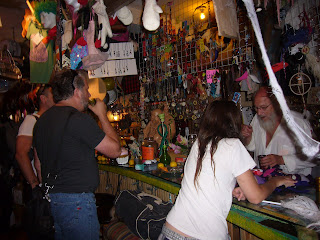 The owner of the place was the old bearded man 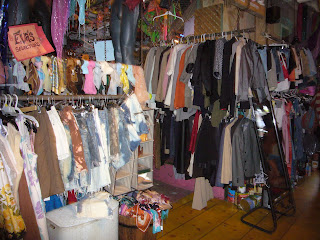 It was all amazing, but the best bit was the Oompa Loompian mountain of clothes.  It was a massive crate of clothes of all kinds that you climbed upon and dug through for things to buy. Anything in that pile was a dollar, and it was unbelievably fun to jump around in. 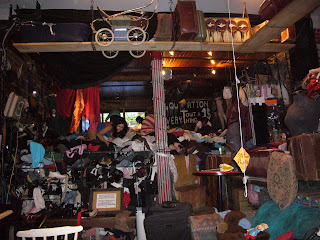 It was easily the size of an upper middle class living room, if not bigger. There was a painting of Santa Claus in the back left corner that said "I am god" as well. 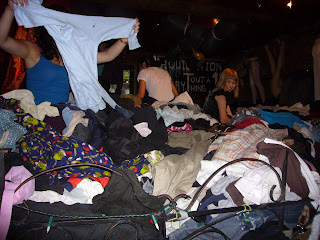 Me on the mountain of clothing
There were loads of people just digging to the bottom to see if they could find the floorboards. No one could get there.
In the end, I got a pair of jeans for a dollar, and a shirt which came free when my Mum bought two belts. Amazing.
Next, we went to Terra Nostra in the humongous Des Jardins mall and bought some very shiny jeans for my Mum. This mall was the most beautiful mall I've seen in my life. I loved the pillars.
Lastly, we went to the Museum of Contemporary Art. It wasn't all that people said it would be, but I really liked one exhibit called Battements et Papillons which featured a grand piano covered in aluminum foil and an open bench containing loads of electronics. These electronics hooked up to hammers which pushed down on the keys of the piano in random patterns that sounded like the scale used in the solo of Tim Minchin's Dark Side. Gorgeous. 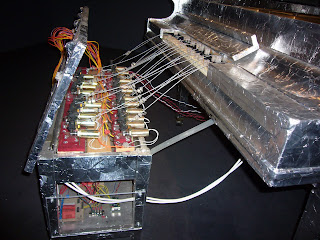 Then came the night portion of the first day. That's when the comedy began.
Julianna xo
Posted by Julianna at 02:38