First of all, if you don't know Jamie Kilstein or Citizen Radio or anything of the sort, look them up. They are sweary, be warned, but they are amazing rationalist atheist(s) who are also very funny. So swearing doesn't end up bugging me. Swearing doesn't even bother me in other circumstances either though...

ANYWAYS. Jamie Kilstein was amazing. Before him were 2 guys who I didn't catch the names of who headed up the show: One crap slightly guy who did the typical whinging about how women are annoying but superior to men, and did an impression of some guy in Star Wars. Not particularly impressed.

2nd guy, don't know his name, but he was pretty good! Actually decently funny, even though he hadn't been in the business too long. Spoke about star signs, making friends in a new city, and being adopted. Actually a good set... wouldn't mind getting his name actually.

Then Jamie Kilstein. He walked out in Nike sort of running shoes, a "Legalize Gay" grey t-shirt & jeans. I loved his tattoos, because for once: someone had tattoos that SUITED them. My favourites in particular were the giant purple monkey with a sword on his right arm, and the penguin on his finger. Suited him.

He talked about a huge range of subjects. SPOILERS: Everything from why he's vegan & how people pick on the weakest animals of the animal kingdom (for example the cow, the stoner of the animal kingdom) to how terrible plastic surgery/makeover shows are to how Donald Trump is like the real life Mr. Burns to how there should be a "Don't Ask Don't Tell" policy for homophobes to how "Thank GOD" is used in cases where children are saved but no one thanks the DOCTOR and how doctors must be driven insane for the lack of credit they're getting. Lots more too.  His fast, frank, sarcastic and slightly random style really brings everything in life into the equation. Really funny & very smart. Loved it.

Afterwards, I was amazed to find the guy who was so sarcastic on stage was so incredibly kind afterwards. He gave me a FREE Citizen Radio Poster (*spasm*), $5 off his Zombie Jesus CD (*spasm*. Actually, he said he was willing to send me them through Twitter for free which was incredibly generous of him, but I wanted to support him for his work), was really sweet for the photo I wanted, and he gave me some of the vegan gingerbread one of the fans made (she even made a J and an A for Jamie and Allison,  him & his wife. Very sweet). I couldn't have asked for more. 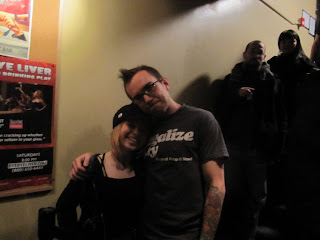 He also wrote me a really long message in my sketchbook for me which says: 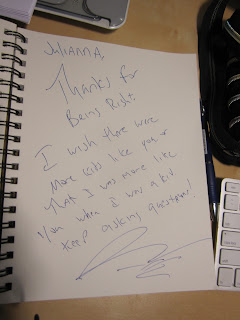 For those of you who can't read anything that isn't typed on a computer, or think his hand writing is messy, it says:

"Julianna,
Thanks For Being Right.
I wish there were more kids like you & that I was more like you when I was a kid.
Keep asking questions!
*insert his really complicated illegible signature here (really, I can't make out any letters in it)*"

Really funny to watch him write it cos it took about half a minute to write and he kept apologizing to me for how long it was taking (don't usually get that much care in a signature).

He also talked to me & my Mum and thanked my Mum for driving me out here (he told us how when he was young his Dad would drive him to gigs where his Dad would sit at the back, not listening while he watched the show). When I said:

on Twitter, he said he thought "Well there's a kid I'm not going to meet..." and was really happy we actually came to see him. Also, he was really happy when I said I found out about him through Tim Minchin, cos apparently Tim Minchin helped him sell his Sydney shows. He also said whenever him & Tim talk, they always end up talking about how amazing their wives are (and mumbled "nerdy").

Enjoyed the night immensely. He's coming back in September & performing at Yuk Yuks from the 14th-18th, if you want to plan really far ahead. I highly recommend him if you like sarcastic atheist and/or political comedy from a tattooed vegan.

Julianna xoxo
Posted by Julianna at 22:35