Look, this was longer before, but it's 2 in the morning, and the internet shut down, so I lost everything. Now to try again. *cheesy grin and thumbs up*
Tonight, I saw Tim Minchin. I love the guy. But this is the best I've ever seen him. And for that matter, seen any concert or act of any kind ever. 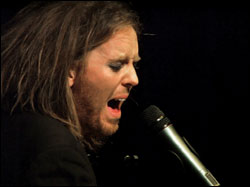 The meetup:
Commensal, 5:00. Ate mildly overpriced vegetarian food, shared British chocolate, got signatures from my Feeter friends, and my school friends. My school friends were Winter, her Mum, Luc, Susannah, and her cousin. And it was very lovely. I gave @h2osarah (great blogger) a photo of us together from the last Tim Minchin gig we went to, signed by me on the back. I also gave her the back the books I borrowed (A Light-Hearted Look at Murder by Mark Watson & Tickling the English by Dara O'Briain, both great standup comedians).  At 6:15 we chaotically rushed through Yonge Street festival crowds, and got to the Elgin and Winter Garden Theatre. My friend Winter joked it therefore belonged to her, and while she held my massive bag of stuff, I ran off to Tim Hortons with Luc.

Look, here's what I did. After seeing a comment on a blog on timminchin.com about Tim coming to Canada saying "If anyone offers you TimBits, take them",  I decided I'd do just that. I know Tim tends to want books and clothes more than sweets, so I only bought a little box of 10 across from the theatre, (with mild stress levels as my friend Luc went to the washroom and went up an elevator that was heading to absolutely any floor of a rather tall building. I was left wondering how long it'd be, and if we'd make it back to the theatre to have ample time). Needless to say, things worked out, and after buying Timbits from a woman called Aysha, we headed on our way.

Note for non-Canadians: Timbits are essentially the insides of a donut hole, made larger. There ping-pong sized donut balls, and they come in packages like this. 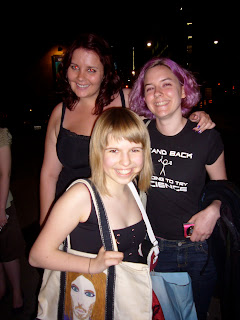 Sarah K, Tibbs, Me in front
I walked up to him while he was meeting my friends to the welcoming of "Hello Julesy!" and a hug.
"You remember me! That's nice of you!"

"Sure! What would you like?"
I brought out TimBits "I know you don't like sweets, but it's a small pack, and it has your freaking name on them."
"I was prepared to sign them! Thank you..."
"I've got far too much stuff... sign this bag I made?" (I made a "Take me to the supermarket" canvas bag, with canvas stitched onto 2 sides of a canvas bag I bought. On one side it says "take me to the supermarket", on the other it has a picture of Tim)
He commented how he liked it, signed it, and put an arrow going towards his face that said "<-- i am jesus" (I did make him look rather Jesus-like in the picture, it's true. The solemn look, the long hair... it all fits.).
He also signed a couple of birthday cards for my friends, and I told him it was the best show I'd ever seen. "What have you seen?"
"You last year in Toronto with Bo Burnham, Conversation With, Eddie Izzard..." I began listing.
"Alright, that's pretty good then." He smiled.
"Are you going to Montreal?" He asked, smiling oddly earnestly.
"I wish! I have no money left..."
"Right, cos you already spent it all on me in UK." He smiled a bit less, almost like he would miss me. "That's ok. Yeah... fine."
He went to some other people, came back gave me more hugs, kissed his hand which he then put on my cheek (cos he had to stand up for a photo.), and I stood for a photo with him, Sarah, Tibbs, and me. 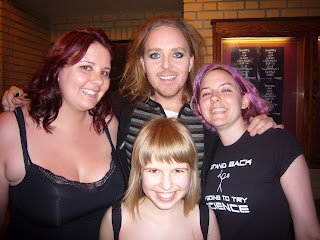 Then I took one with him and my friends. 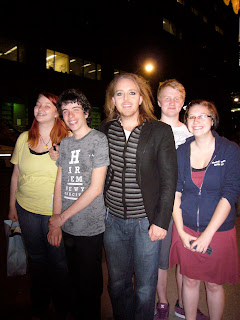 Then I asked if I could squeeze in there, gave the camera to Sarah to take a photo,  and I snuck under Tim's arm, mumbling "Let me just get under here like a little monkey...". "That's my Julianna!" (can't lie, that made me grin a hell of a lot). The photo was taken, Luc, Peter, and Winter's Mum left. 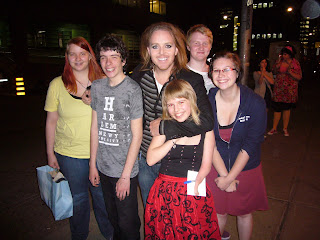 Susannah, Luc, Tim, Me, Peter, Winter
"You were the one who got me into politics, rationalism, to be better at piano..." I told him.
"So basically better at being a nerd?"
"Yeah."
"Then you're an even better girl."
Then he said goodbye, ran off towards Massey Hall with his suitcase, and disappeared into the night.
Julianna xoxo
Posted by Julianna at 23:36